As well as being a battle tested 3D studio, we provide technology for innovative artistic installations for the events and entertainment industry. Our work has featured at international exhibitions including the Venice Biennale and major UK events including Comicon and the Brighton digital festival.

Our 3D scanning studio is based in the heart of Brighton, UK.

Email us for consulation on a project or to find out how our technology can help you as an artist.

Since 3Dify launched with the first 3D body scan and 3D print art installation in the UK we've worked on some fascinating projects with amazing companies and artists. Here are some of our favourites:

For the brilliant Amsterdam film makers and production house The Panics we 3D scanned a soldier in full WW1 uniform. A detailed head and body scan were post produced by the studio for a spectacular VFX shot frozen in time and space, for their sci fi teaser Salvation, directed by Mischa Rozema.

For the Stephen Jones exhibition, celebrating the work of the leading and radical milliner, we captured a highly detailed 3D scan of Stephen using photogrammetry and scanned a small sculpture of King George IV at the museum. The two scans were used to create life size 3D printed busts, which featured prominently at the exhibition. Click on the 3D models and drag them to view the cleaned and remodelled scans used for physical sculpture creation.

To help create the visual effects for a crowdfunded short film about homelessness in the UK, 3Dify captured detailed head, hands and feet 3D scans of actor Steve Evets. Pavement was produced by Hannah Stevenson and directed by Jason Wingard, and is part of the anthology Uncertain Kingdom.

3Dify are incredibly honoured to have been placed in charge of 3D scanning for Argentinian artist Claudia Fontes' Venice Biennale sculpture. The challenge was to scan two people at a quality high enough for them to then be fabricated at life-size, and scan the artist's maquette of a horse so it could be re-created as a 5 metre tall sculpture. We provided 3D photogrammetry scanning and collaborated with 3D modelling artist Lola Lipsum, who digitally remodelled and re-posed the scans, to realise the artist's amazing vision. Heralded by mainstream media as one of the 'must sees', it was also recognised as one of the 'most photographed' exhibits of the 2017 Venice Biennale.

Commissioned by experiential marketing agency Experience12, we provided bespoke technology for the Vue RealD stand where we captured over 300 costumed attendees and created 3D models for them to view online during the event. The models have received over 30,000 views online. Click on a model to load then drag around to view the model in 3D.

We're very pleased to have worked with Merlin Entertainments on the spectacular Little BIG City, a permanent exhibition in the iconic Berlin TV tower, which takes the visitor on a journey through the history of Berlin in miniature. 3Dify created full 3D body scans of people in authentic period costume and digitally enhanced the models, which were then 3D printed, painted, and added to amazingly detailed historical multi-media dioramas.

Hawkeye, leaders in the field of sports line call technology, gave 3Dify the challenge of scanning a cricketer in full kit using our high resolution photogrammetry system, and with the help of supreme 3D artist Lola Lipsum, we provided an optimised and retextured model to work in their 3D visualistion for sports television.

For the Brighton Costume Games and the Brighton Digital Festival wrap party we provided the ultimate photobooth 'Revolve'. Our custom 40 camera bullet time rig froze revellers in action and printed a unique QR code linking to their online video during the event.

At the Brighton Digital Festival, 3Dify™ provided the technology for the first 3D scanning and 3D printing installation in the UK, Break the Mould. A collaboration with innovative Brighton digital agency Developing Dreams and renowned Italian artist Emilia Telese that received widespread mainstream press attention. People were invited to step inside a giant sculpture, get scanned, digitised, and 3D printed as a mini sculpture. Thanks to The Arts Council, 3D printer makers extrodinaire Ultimaker, Brighton's Wired Sussex, Same Sky, and talented director and filmmaker Frit Sarita Tam from Think Again Productions who created the brilliant Break the Mould mini-documentary.

Since we 3D scanned the superb BBC tech correspondents Bill Thompson and Gareth Mitchell for BBC Click at the launch of the Break the Mould installation, 3Dify™ have been featured in the Guardian - named as one of Brighton's leading tech startups, on ITV, BBC, in local media, and have written articles for magazines on 3D scanning technology. 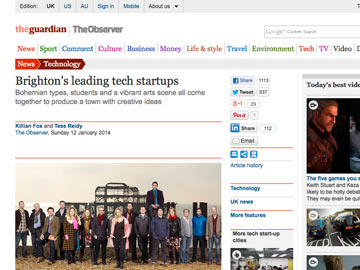 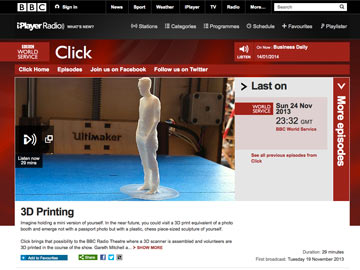 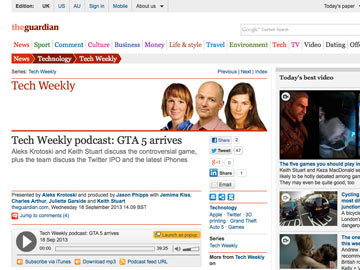 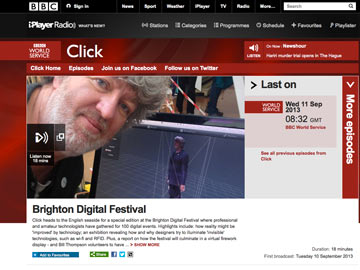 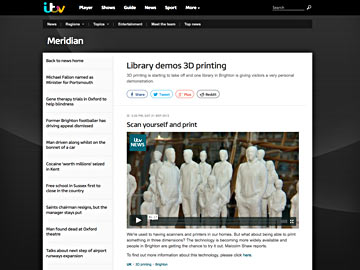 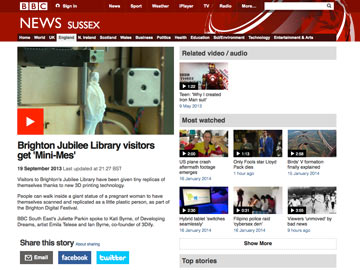 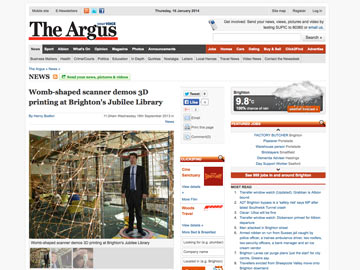 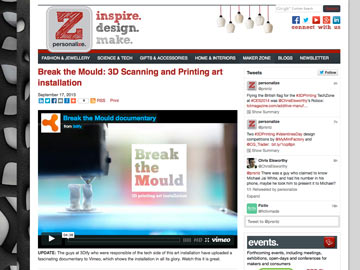 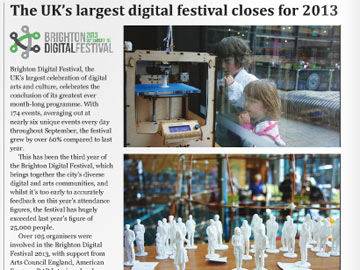 Get in touch if you'd like to discuss a project by filling in the short form below.